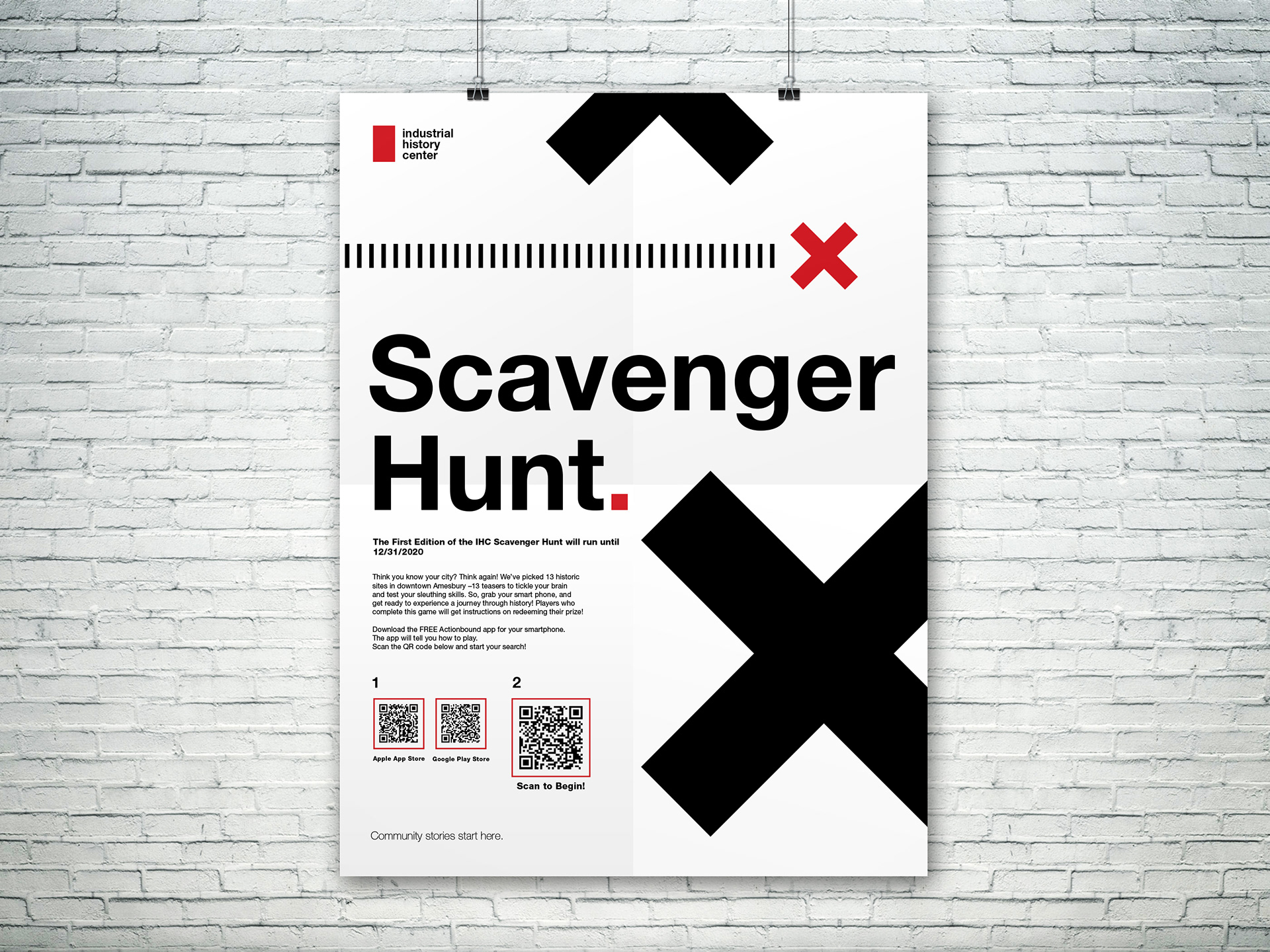 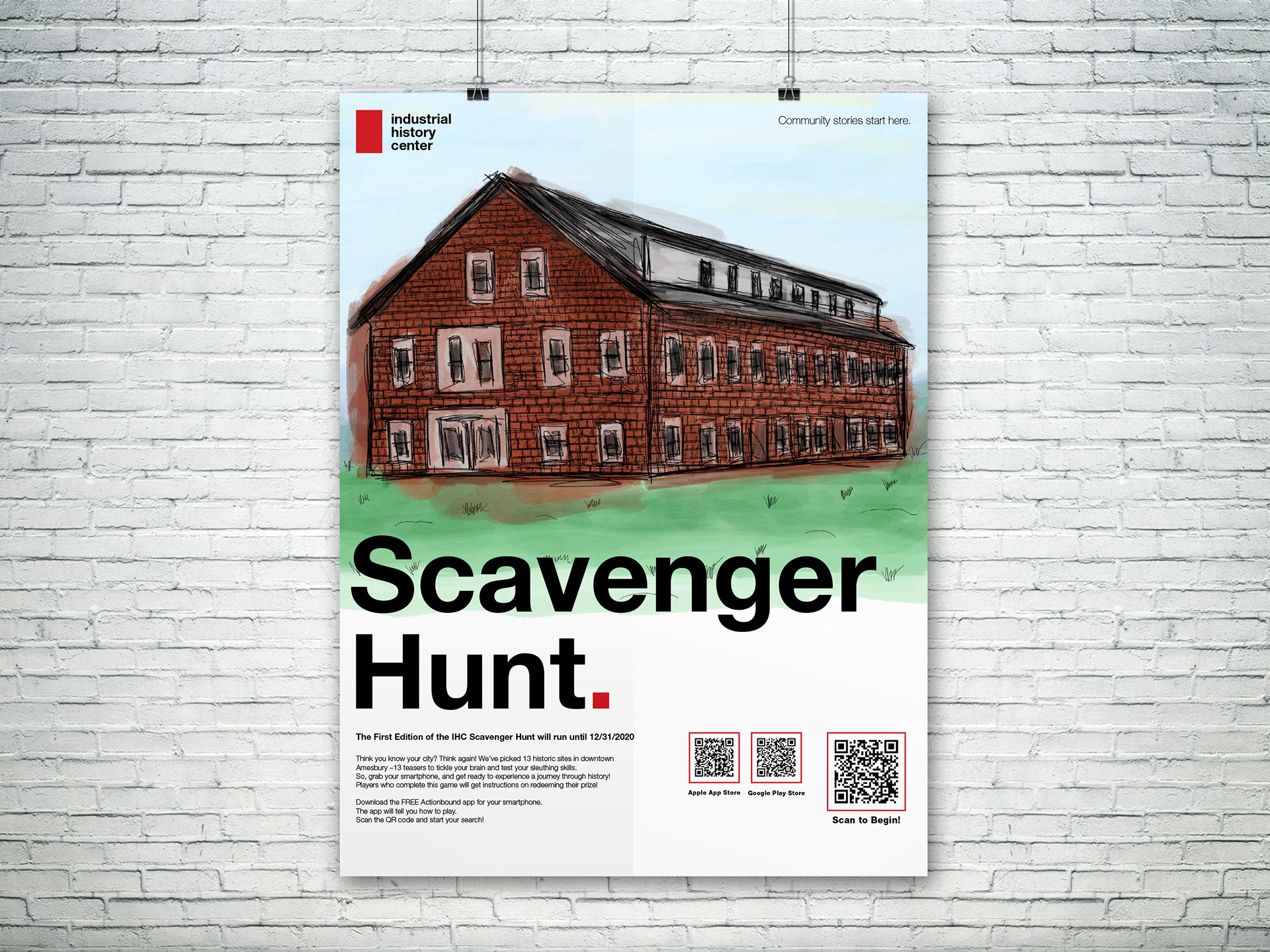 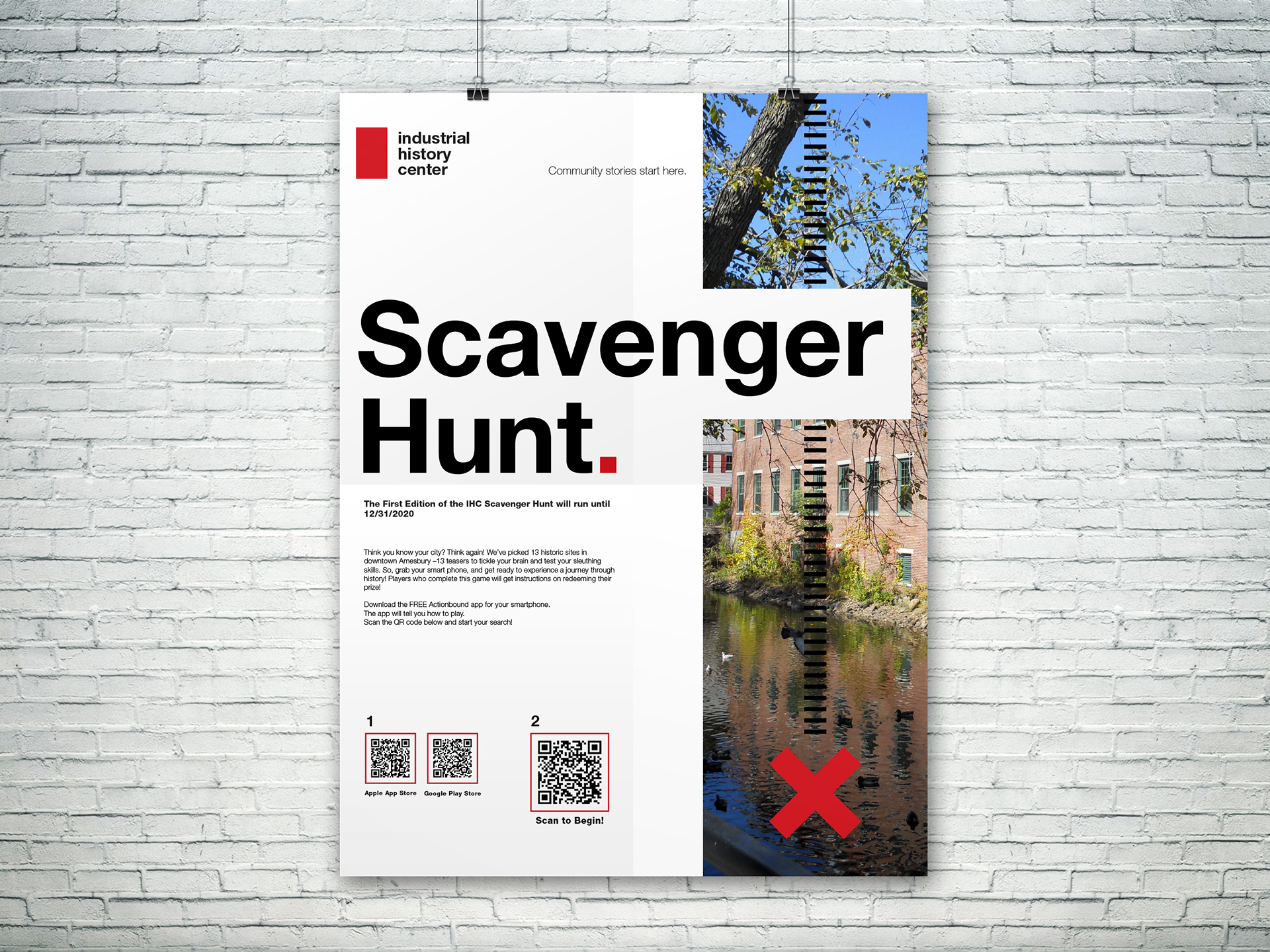 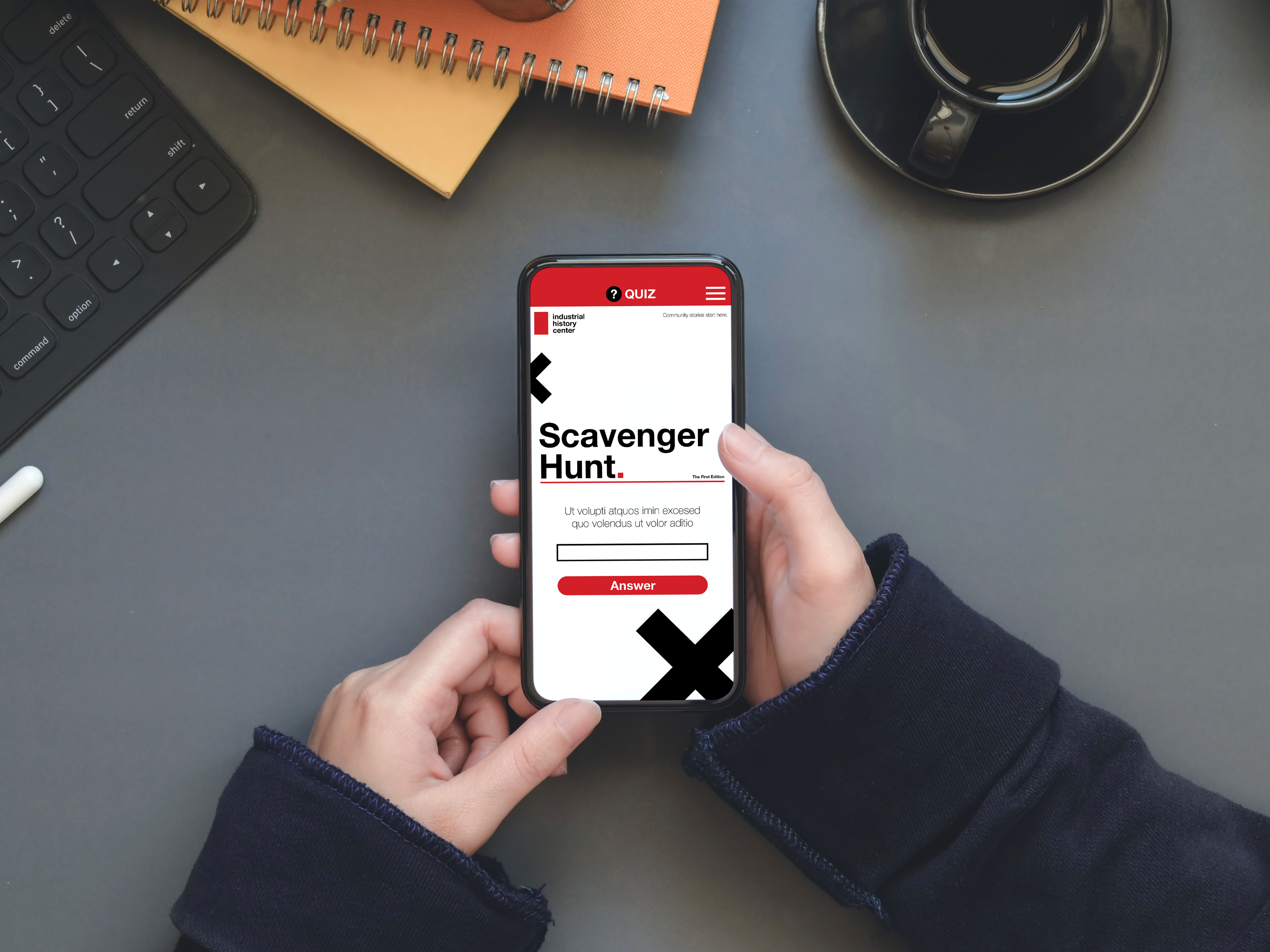 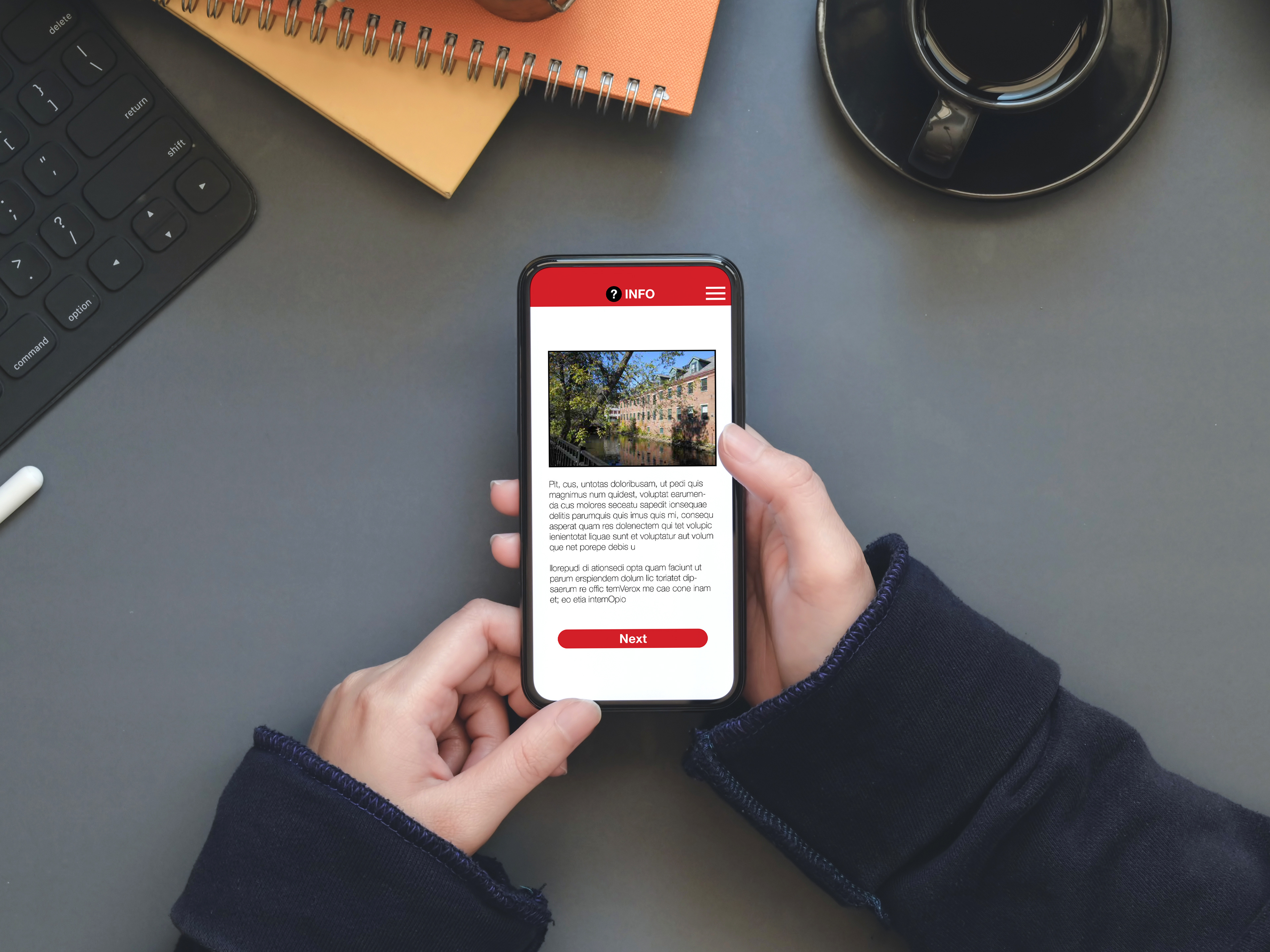 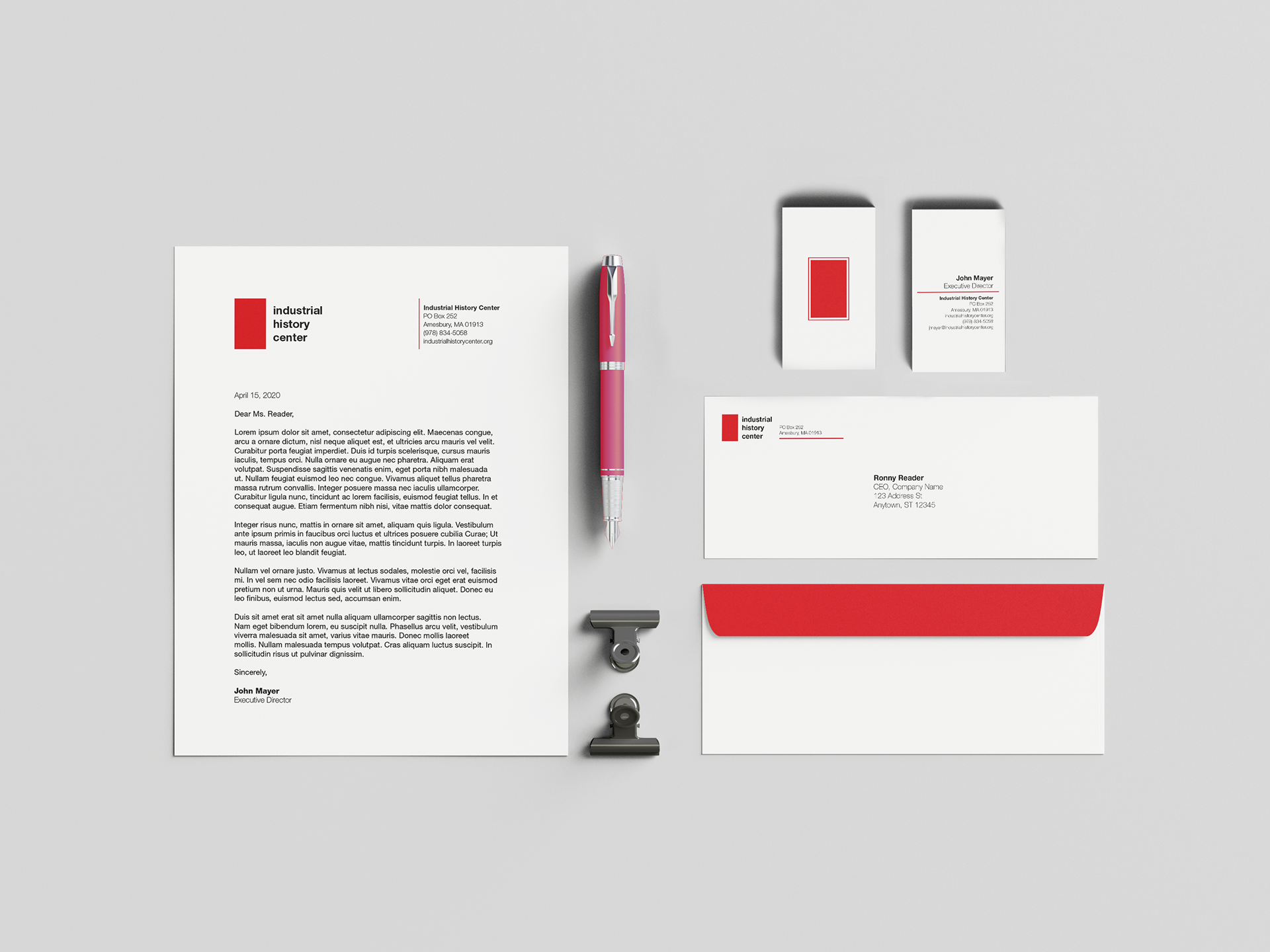 industrial history center
february 2020 - may 2020
During the second semester of my junior year at Merrimack College, my graphic design III class had the opportunity of acting as a design firm for a real organization: The Industrial History Center / Amesbury Carriage Museum in Amesbury, MA. Their goal for us was to not only help them in the creation of some designs for their new museum, but to actually have some input on how the museum could possibly work.One of the most important questions for us to try to answer during our brainstorming was what would make young people want to visit this museum?
my role
One of the pieces that I took leadership of was an educational experience for students visiting the museum. I designed and began the development on a scavenger hunt that would take players around the nearby area in Amesbury in which they would learn about its history in a fun and engaging way. As a class, we were also tasked with creating stationery sets for the director of the museum, John Mayer.
process
As we began the project, we began with a meeting with IHC, learning about what they are looking to do, and also for brainstorming what we could do to help them and create for them. They were interested in an educational activity for students and I proposed a scavenger hunt idea, taking them on a walking tour around the town. In my research I found an app that the scavenger hunt could be built within, called Actionbound. After many meetings and critiques on my ideas for how the scavenger hunt would play, the resources needed, and the actual designs (posters and the Actionbound app design), I was able to work towards a final submission that would be ready to put out and play.
successes / failures
My scavenger hunt game was originally focused around collecting special cards, being put into teams based on card suits, and filling out a physical answer sheet at a designated area at each specific location. After proposing this idea, the logistics and resources needed would've been to great and unnecessarily complicated. After regrouping, I adjusted the game to be completed virtually, without the need to setup any stations at each location. With a simplified, and less costly version of the scavenger hunt, the idea was approved and I was able to continue onto what was submitted. One difficulty I did run into in my design process was trying to adhere to the already set design style guide. Before ever bringing us in as a class, they had a design style guide made which included poster templates and rules for using their logo and slogan. When designing the poster options, I wanted to give them a bunch of different styles to choose from, one of which using their poster template. During our last meeting, the one they liked the most was one of my original layouts (the typographical "X" poster).
final results and evaluation
While it is yet to be seen if the IHC will adopt my scavenger hunt game when they open up, the most important results I got from this semester-long project was the experience of working directly with a real client and organization. Real world experiences and lessons are the most important for students majoring in graphic design, and this project taught me a lot about communication, collaboration, and presentation. It let me work on and practice the skills that I need to use as a professional graphic designer.
↑Back to Top